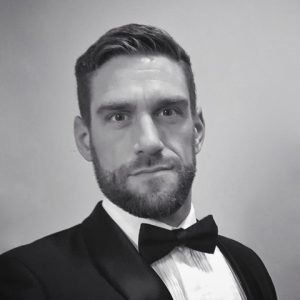 James studied at Chetham’s School of Music in Manchester and Christ’s College, Cambridge where he was the organ scholar.

James is currently the Musical Director for Guys And Dolls, playing at the Théâtre Marigny, Paris.

Other conducting credits include The King and I – Royal Albert Hall, Spring Awakening – Lyric Hammersmith and Novello Theatre, The Sound of Music – London Palladium and Cats – national tour.

On television, James has played the piano for Pet Shop Boys: A Life in Pop, X Factor, Last Choir Standing, The Sharon Osbourne Show, This Morning, The Alan Titchmarsh Show and Hollyoaks.

He performed at the Royal Albert Hall playing keyboards for the 20th Anniversary Reunion Concert of Boy George and Culture Club and also played the Albert Hall organ for the The Phantom of the Opera 25th Anniversary Concert.